As promised the first of my recipes for a healthy and easy homemade Thanksgiving. No, nothing is easier than opening a can but this comes in a pretty close second place. I had never realized how easy this could be and how much better it would taste than the factory produced goo. So let me know if you try it. I hope you do!

Ingredients:
16 oz Cranberries, washed and picked over
1 cup sugar (I halved the sugar in this recipe and I still felt like it was a lot. You could also substitute agave but start with just a few teaspoons and add as needed as it is significantly more sweet than granulated sugar.)
1/2 cup water
1/2 cup fresh orange juice (unsweetened, fresh from the orange)
1 Tbsp finely grated ginger (make sure it is finely grated)
Finely grated zest from 1 orange (make sure not to grate in the white pith as it is very bitter)

Combine all the ingredients in a small saucepan and cook over medium heat until the berries pop open. This will take approximately 10 minutes. Make sure the heat is not too high or you can scorch is pretty easily.
Remove from the heat and let cool. It will appear runnier than you expect but as it cools it will solidify into more of a jelly. You will need to skim the foam off once it is cool. It can be refridgerated for up to 3 months so it is a great make ahead dish for the holidays! 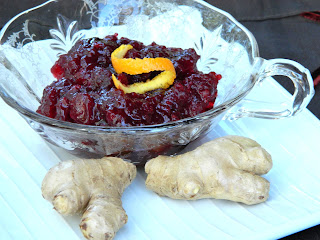 Let me know if you try the recipe! You can adapt it quite easily. Don't like ginger? Add a cinnamon stick and remove it before the sauce cools. The options are endless and certainly delicious!
Posted by Simply Tasteful Eats at 4:00 PM 5 comments:

For those of you who know me already you know of my undying affection for sushi. Make that all out obsession. It started with a determination to try the "raw fish" Japanese food that people in my small town mocked. One day on my way from college to my job in a veterinary office I stopped in a new sushi restaurant on Route 1. I went in and told the guy behind the counter I had no idea what to order and just give me what was good. He sent me home with a California roll. I was not impressed. However I was still curious. Eventually I met a friend who did know something about sushi and I couldn't get enough.
Since then I have searched for truly great places that I love. One of the them is a restaurant called Oishii. They are fantastic but tiny and the wait can be 2 hours some evenings so I rarely go there. When one of my clients wanted to truly fantastic sushi for an event recently I knew it would have to come from one of the best and it was impressive. You can see just from this picture the quality. Just looking at it makes me hungry. 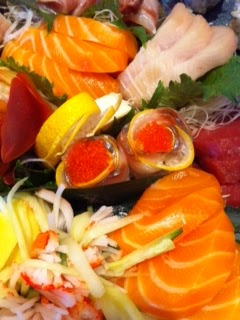 I have tried making sushi on my own. The first time was interesting. Not horrible but definitely had a homemade feel. Subsequent attempts have gotten better but there is nothing like sitting in a sushi bar letting a master make it for you.
Posted by Simply Tasteful Eats at 4:34 PM 5 comments:

The best way to start off a cool fall evening in November is with a hot glass of local mulled apple cider. Since I was a child when I would smell cider it would invoke good memories. Hunting for a Christmas tree in the snow with my first boyfriend. Holiday shopping with my mother. I had never ventured to make it on my own and after several of my clients requesting cider for their events I decided it was time to make some at home. Here is my recipe. Hot mulled cider is not complicated and is easy to customize so feel free to add what you like. One recipe I did see even recommended studding an apple with whole cloves and simmering it in the pot with cider. I thought that sounded fantastic and maybe I will try it in the future. 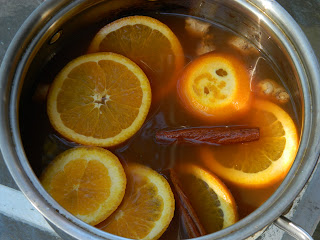 A friend used to tease me that my idea of an amazing weekend was heading to the local foodie stores or hunting for new ones and seeing what new and interesting things they have. He was more right than he knows and when I was single I used someones willingness to try new cuisines as a criteria for compatibility. There was one first date with a retired marine in which he would not eat the "weird" cheese pizza because it came from a brick oven or drink the root beer that had been brewed locally because it tasted funny. I think he barely slowed down as he drove by my house and I hurled myself from the car. When my fiance and I met I made a deal with him that any restaurant we tried that he didn't like I would pick up the check. He liked that proposition and to this date the only 2 he hasn't been crazy about was dim sum (I do not understand it) and Ethiopian food. Luckily I have friends whom enjoy both with me.
Tomorrow on my list of places to visit is the local spice market. There is a fabulous one in Cambridge that has everything you could possible desire. On my list  is cinnamon, sichuan peppercorns, and dried chiles. I can guarantee those will not be my only purchases and I will share them with all of you. Also on the agenda is a great deal of cooking to use all of my organic produce from the box. Asian food will forever be a favorite of mine and tonight instead of takeout I am making a spicy orange sesame chicken adapted from the American style recipe with some local pea pods I found at Whole Foods and onions from the box. Tomorrow night a twist on the classic Polish pierogi with sweet potato filling and caramelized onions. Dumplings of all kinds are my ultimate comfort food. There is something so homey and satisfying about sitting down to a plate of buttery and plump pierogi that is so enticing. For dessert a simple and rustic local apple and pear galette. They always look so impressive but are really quite easy yet delicious. Sunday morning a turkey trial run recipe, sweet potato biscuits. I never will serve an untested recipe on Thanksgiving and I have seen several versions of the recipe online over the years. Now that I seem to have a surplus of sweet potatoes in the house it seems like the perfect time. Hopefully all of these recipes will provide me several days of recipe posts and I will get to use my new camera to take some fantastic photos.
Have a great weekend. Any interesting culinary plans of your own?
Posted by Simply Tasteful Eats at 2:56 PM 2 comments:

This morning was like Christmas to a food nerd. My first delivery from Boston Organics of local produce. I had signed up for the $29 Dogma box which was all sourced in New England. They allow you to pick the size of the box and what ratio of fruit to veggies in most of the other boxes but the local only comes in one size and you get no choice in what comes in it. I was apprehensive but looked at it as a culinary adventure. Supporting local agriculture is important to me and I was hoping this would be a nice replacement to our local farmers market that had ended last weekend.
All day I sat at my desk in anticipation of its arrival. Yes, I really am this big of a food dork. When it came I eagerly popped it open and found:
1 lb Bosc Pear (3 small pears)
1 lb Fuji Apples (2 apples)
1 8 oz Bag Cranberries
1 4oz Clamshell Alfalfa and Radish Sprouts
2 Heads of Cabbage
.75 lbs Butternut Squash (This was in replacement of a celery root which was fine by me. I like squash better)
1 Head Green Leaf Lettuce
1 lb Red Beets
1 lb Yellow Onions
1.5 lbs Sweet Potatoes 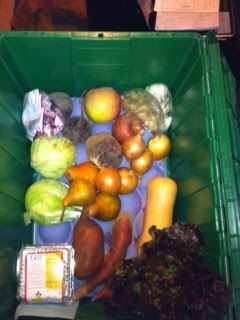 I have to admit it looked kind of small to me for how much it cost. I had yelped the company before I signed up and there were several people who mentioned they did not feel it was a good value. I wanted to test the theory so I headed off to Whole Foods after work so I could add up what this box would have cost had I just gone there and purchased it.
The verdict $20.15 at Whole Food. Almost 9 dollars cheaper. I have to say I have never seen Whole Foods be the better deal before, ever. There is an undeniable convenience factor but it isn't worth $9 to me. Overall if I was one of the people in the city who didn't have a car I think this would be worth it for me but as I can easily head to Whole Foods and buy what I want this will most likely be my one and only delivery. ﻿
My original plan was to post photos of what I did with the box so here is the first photo. A salad made with the green leaf lettuce and topping I grabbed from the salad bar. Mmmm Asian style tofu and ginger carrot dressing. It was delicious! Once I get a reliable light source I am hoping the photos will be better as well. 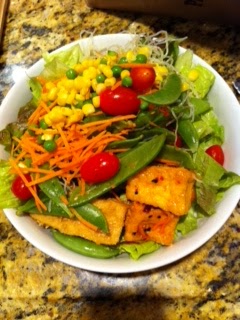 Have you tried something like this before in your area?
What did you think?
Posted by Simply Tasteful Eats at 5:01 PM 5 comments: 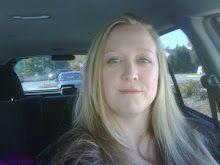 What is your favorite nut in brownies?